In a lean business problems should be solved as they arise.  It is important to fix the root cause of the problem, not simply the symptom of the problem, to ensure that the problem will not simply re-emerge in a different form.  This means that all staff should be familiar with some simple root-cause analysis techniques.  Here we will look at three: Five Whys, Fishbone diagrams and Pareto charts.

Simply ask why something is happening.  If the answer isn't a root cause which can be addressed, ask "why" again and keep doing so until the root cause is found.  This may require fewer or more than five rounds - there is nothing magic about the number five.

While there is a 'fix' at each level, it is only at the last level that the problem can be solved completely.

In more complicated situations it may not be clear what the cause of the problem is.  All potential causes must be considered and eliminated, leaving only the actual cause.  To surface the full range of possible causes a fishbone or Ishikawa diagram is used. 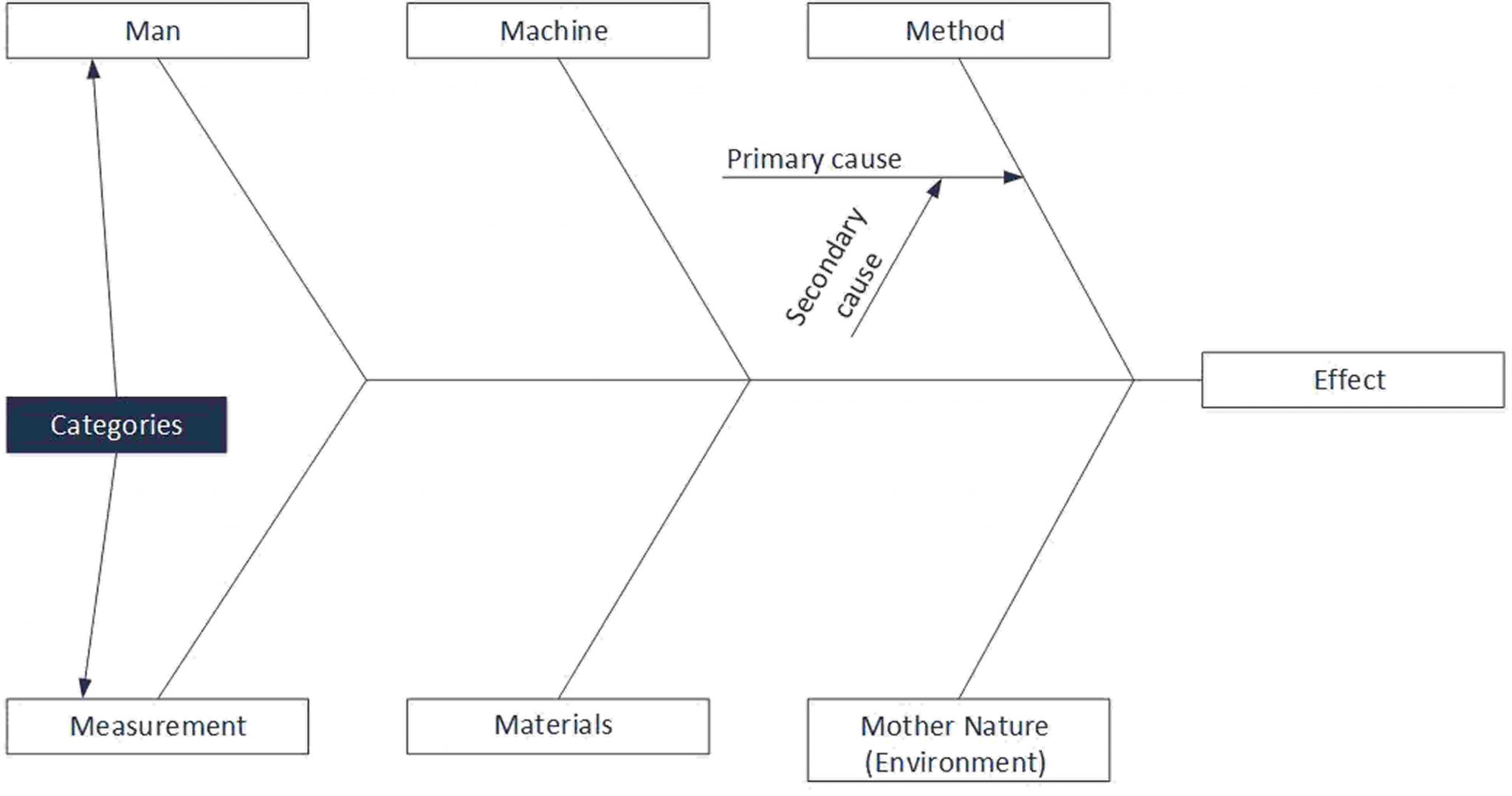 At the'head' of the fish is a statement of the problem - the effect whose cause is being sought.  At the ends of the 'bones' are the possible cause categories.  In this example we have used Man, Machine, Method, Measurement, Materials, Mother Nature (Environment) (the Six Ms) , which is suitable for production environments.  In a service environment the Four Ps ( Policies, Procedures,People, Plant/Technology) are often used as an alternative.   Along each 'bone' are the  possible causes and attached to these are possible secondary causes.  The idea is to think of all the possible contributors to an effect to ensure that none, however unlikely, is overlooked.

Having completed the diagram, experiments should be devised to determine the extent of the contribution of each identified cause to the effect.

At a chemical plant the quality of one product was varying unacceptably.  A fishbone diagram was drawn up and 'The Weather' was entered as a possible cause on the Mother Nature 'bone'.  To eliminate this, air pressure and outdoor temperature were recorded for each batch and were surprisingly found to be responsible for all the variation in product quality.  A 'Five Whys' then revealed the cause to be varying concentration of an aqueous reagent due to temperature dependent solubility.  Bringing storage of this reagent into a temperature-controlled area solved the problem.

Pareto's Law or the 80/20 rule was discovered by Italian economist Vilfredo Pareto when analysing the distribution of wealth among the Italian population. He discovered that 80 - 90% of Italy's wealth lay in the hands of 10 - 20% of the populations.  This sort of distribution is frequently observed in many fields: 80% of defects will arise from 20% of causes; 80% of complaints will come from 20% of customers.

The technique of arranging data according to priority or importance is known as Pareto Analysis and is an important tool in identifying priorities for improvement.

The example below plots the frequency of rejection of batches of a dyestuff against causes of rejection. 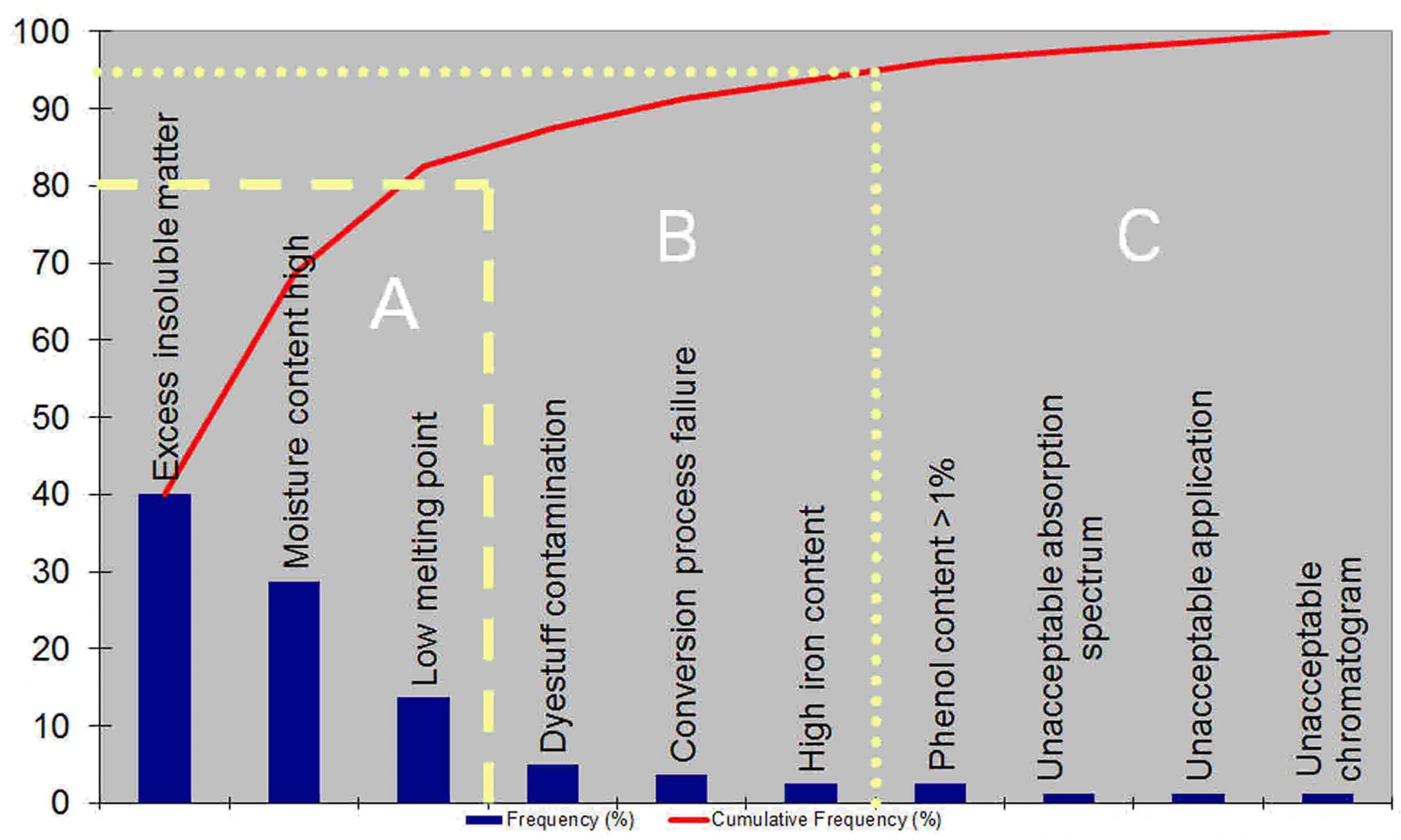 The items in the area marked 'A' are responsible for more than 80% of the batch failures.  Once these are fixed, attention moves the the 'B' failures.  'C' failures should only be addressed when all the more important failures have been remedied.

Note that while this analysis establishes priorities for the reduction in frequency of scrapped batches, it does not tell us, for example, whether this is the best approach for reducing the costs of failure.  The analysis must be done again with cost, rather than frequency, data to determine this.