5S is an approach to efficient workplace organisation developed by Toyota over the last 50 years.  It has been applied in many manufacturing and service organisations. 5S is one of the three pillars  of Continuous Improvement, along with waste elimination and work standardisation.

5Ss is not an end in itself: it is the means by which you may continually improve your efficiency by helping you to eliminate waste and standardise processes. It is about the creation of an environment within which continuous improvement can happen, and it is about the development of a culture which expects improvements to be made. By reducing clutter in the workplace, 5S highlights waste in all its forms.

The name 5S derives from the Japanese names of the 5 stages in improving workplace organisation: Seirei, Sieton, Seiso, Seiketsu and Shitsuke. There are a number of translations of these, some of which retain the initial S, which are listed in the table below. None is a perfect translation of the Japanese, so listing the variations is useful, particularly if you read books on the subject which may use the other naming conventions. We also list Henry Ford's CANDO approach from his 1926 book Today and Tomorrow, which was largely forgotten during the Great Depression.

The first step is to sort through the items in the workplace and remove anything which is not needed. If the item is likely to be needed at some time in the future, it should be moved to a documented storage location.

Stores, both tools and spare parts, should be checked through for obsolete or unnecessary items.

Having removed all unnecessary items from the workplace, the remaining items should be arranged in the most convenient and practical way for the process to be carried out. Each item should be named, labelled and have a permanent home to which it is returned after use. Tools which are dedicated to a particular machine, for example, should be kept near that machine. Shadow boards should be used to mark storage locations for small items, larger items should have a marked location on the floor or against a wall. All rooms and all walls within each room should be numbered so that storage locations may be identified easily.

No storage of any sort should be allowed in marked walkways.

Colour coding can be used to distinguish items belonging to different areas or processes. 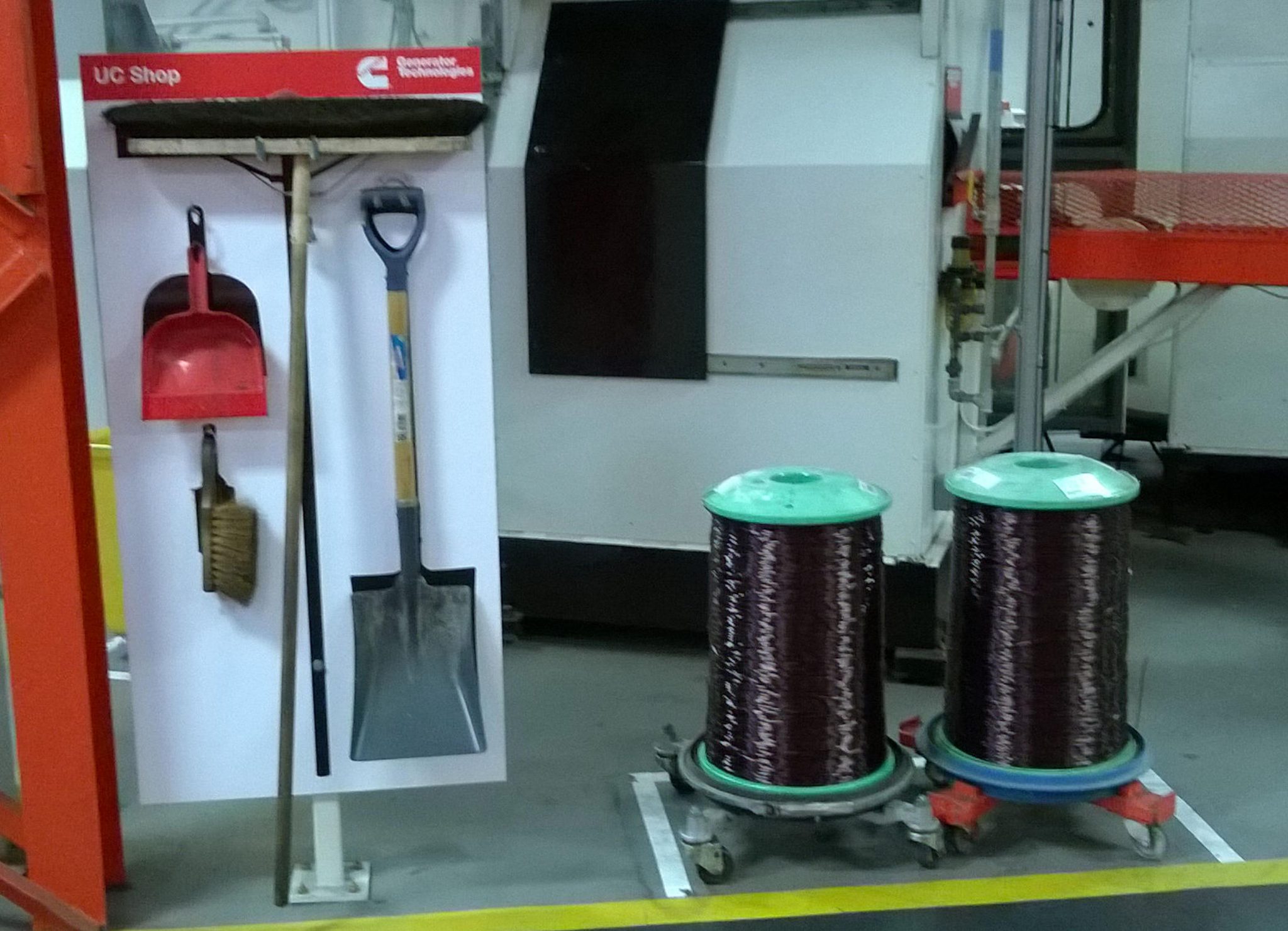 An example of the Set in Order stage.  The rack of cleaning tools has shadow markings to show where each tool goes.  On the floor to the right a storage area is marked for raw materials.  At the front is a yellow line marking the edge of the clear walkway.

The whole workplace should be cleaned thoroughly and kept clean. This does not just improve the appearance of the workplace: the act of cleaning equipment allows it to be inspected and problems e.g. oil leaks will show up much more quickly on clean machinery. Some basic preventive maintenance e.g. checking the tightness of bolts etc. can be carried out during cleaning.

Develop standards for the first 3 Ss to ensure that the gains made are maintained.

Develop and continually improve standard methods of work. Standards belong to those who are doing the job, and capture the best known way of doing the job. Three aspects of standard work must be understood:

You need to take positive measures to ensure that progress continues to be made. Regular audits should be made against the agreed workplace standards. Steps 1 and 2 should be re-run periodically to ensure that new equipment is integrated into the system and obsolete equipment removed. Standards should be reviewed regularly and improved if possible.

Visual management is an important element in sustaining Five S.

From left to right:

Thanks to Cummins, Stamford, for allowing these photos to be used.